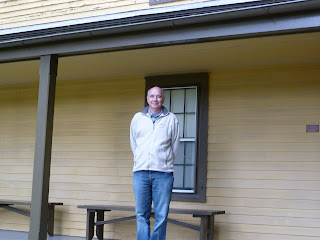 After dropping our daughter off for her first year at Hampshire College, we took a buffer trip around the Berkshires before heading home to the prospect of an empty house. Unexpectedly, because I only dimly knew it was there, we stopped at Arrowhead outside Lenox, Massachusetts, Melville’s home from 1850 to 1862, where he wrote some of his most famous work, including Moby Dick, The Confidence Man, “Benito Cereno” and “Bartleby.”

Bartleby was written on the porch or piazza (see above photo) as Melville called it. The house and grounds couldn’t be further away in spirit from the deadening Wall Street of the story and its unnamed narrator’s lock-step existence. Surrounded now by fields of crisp yellow flowers and woods at the perimeter, in Melville’s time it was a working farm where all 11 family members pitched in while the author wrote from early morning to late afternoon in his study above the piazza.

After Melville wrote Moby Dick, looking out his window at Mount Greylock, which indeed, as it was said to have inspired the tale, does look in silhouette like a great leviathan, he virtually stopped writing for the next forty years. He moved the family back to New York and worked at a customs house for four dollars a day.

Melville’s troubles are fairly well known: the rebuke to his writing with the failure of Moby Dick. Readers found it too expensive ($1.50), profane, and, well, if you’ve read it, hard going. He never quite recovered: he drank more, endured the tragedies of three of his four children dying from illness or in one case his son’s suicide, and–the bitter fruit on top–a mother in law who disliked him second only to how much she disliked his writing

Standing there on the porch at Arrowhead I could only imagine how hopeless he must have felt to leave this beautiful place and have to return to New York to try to make a “real” living. You’ve written a masterpiece of American literature, you’ve penned (literally, in his rocking chair on the piazza)the magnificent “Bartleby,” and you have little to show for the efforts other than a mother-in-law who harangues you about not making a decent living for your family and hates your writing.

I went around touching all the articles–the steamer chests, the wooden toys of the children, the trundle bed–that actually belonged to Melville and his family and weren’t replicas, and hoping as if by some animism I might absorb the spirit of this most prolific period of the author’s life before dissolution and failure set in.

Any visit to a great writer’s house is a pilgrimage at which one–another writer, that is–tries not to feel too self-conscious about his own insignificance in being there. I certainly felt that way when I saw Faulkner’s home in Oxford and his very, very tiny typewriter and comprehended that he wrote those densely packed works of often opaque modernism on an instrument barely the size of a large man’s palm. No fancy software to do that magic; it instantly disabused me of thinking any auxiliary object, pen, pencil, computer, the perfect writing room, could compensate for talent. And a writer’s will to persist.

But of course the question arises as to what happens when the will flags? And flag it will. At Arrowhead, the question cast a dizzying spell over my visit there: how bad does it have to get before one gives up (or the world causes you to give up on yourself)? If someone with Melville’s literary powers could be defeated, how can we mere mortals hope to go on in the face of rejection and doubt?

One of my favorite quotations is by Jean Rhys:

“Listen to me. I want to tell you something very important. All of writing is a huge lake. There are great rivers that feed the lake, like Tolstoy and Dostoyevsky. And there are trickles like Jean Rhys. All that matters is feeding the lake. I don’t matter. The lake matters.”

Equally appealing is Flannery O’Connor’s infamous retort when asked if universities stifle writers: “My opinion is that they don’t stifle enough of them.”

As a teacher I tend to share Jean Rhys comment freely and hold back on O’Connor’s. But they actually make a complete set. At any given time, the writer has to be willing to subjugate the ego enough to persevere, humble oneself to accepting that you will be only a small trickle and that as such your work may never see the light of day outside the confines of your house. And that this is enough reason to go on, and indeed the only reason to go on: that you are making something of importance aside from any grand notions you might have of quenching the thirst of millions with the great river of your work. Only the lake matters, which no one owns, no one controls, no one can tell you to stop so barely trickling toward.

On the other hand, there is O’Connor with her inimitable blunt wryness telling us to put a sock in it, stop the madness, kill all the writing programs and the wannabes, cease and desist from subjecting everyone to your neurosis, your hand-wringing failure over your career, your pus-like envy of those more successful than you. This is valid too, but not in the way of it being more truthful than Rhys. Rather these two represent the poles that writers have to live with every day, with every work begun or finished, whether there’s the glow of success or the shame of a public flogging, exultation and celebration or paralysis at trying to write a single word.

After Melville finished Moby Dick, he famously wrote to Hawthorne “I have written a wicked book, and feel spotless as the lamb.” And then began the wait for recognition that never came. So obscure was Melville by the end of his life that the obituary in the New York Times referred to him as “Henry” Melville.

Some very fortunate few may have consistently lasting and unbreakable doses of confidence in themselves that never fail them. But for most of us, we vacillate between writing for favor and writing for ourselves, convinced that we should be praised one moment, stifled the next. Melville of course, as few will, did have his great audience, if years after he died. In the meantime, he reduced his efforts to writing a book of poetry for his wife alone. Such are the vicissitudes of the profession. You come to accept the mysterious design in all its disappointment, satisfaction, occasional glory, and guiding humility.